MEMPHIS, Tenn. — A 56-year-old man was nearly mauled to death by a pack of dogs Monday night, witnesses said, and when a woman stepped in to save him, she was bitten, too.

“Them are holes in her legs, big holes,” Ella Stevenson said of her sister’s injuries. 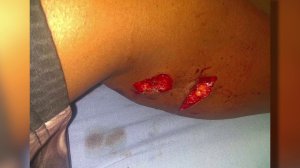 The attack happened at the corner of Princeton and Malcomb in Binghampton around 11 p.m. The dogs initially attacked a 56-year-old man.

“She heard somebody hollering, and then she ran out there with a bat,” Stevenson said.

Her swings sent the dogs running, but not before they had bitten her.

Police said the man she was trying to save went to the hospital in critical condition with bites covering his body, including his face and neck.

“There are big deep bites,” Stevenson said. “They weren’t just biting to be just to be biting. They were biting to kill.”

Neighbors said these are the same dogs responsible for other attacks, including one several months ago on De Larry’s nephew.

“Ate his leg all up, bit him all in his leg and everything,” Larry said.

Police said Memphis Animal Services seized a pit bull and a German Shepherd mix responsible for the attack from a home on the 3100 block of Princeton, but witnesses said there are still two dogs unaccounted for.

“I don’t own the dogs,” said a woman who answered the door at the home.

Minutes earlier, WREG spotted another woman walking out of the home with a brown pit bull.

“They need to take them damn dogs from them folks,” neighbor Michael Woods said.

If that doesn’t happen, neighbors fear more people could be hurt.

“Every single day, kids walk to school, but you got big old dogs running around here loose,” Stevenson said. “It could have bit one of them. They couldn’t fight no big old pit bull off.”

Police said they ended up arresting one of the dog owners for disorderly conduct after he shoved an officer. They also arrested the man who was attacked after running his name and learning he had an outstanding warrant.

MAS responded to a request for comment with the following statement:

MAS responded immediately to a call from MPD yesterday to investigate a bite on Princeton. When our officer arrived, the victim was already at the hospital, so we were not able to verify the bite, but we impounded the dogs reported to be involved, both of which are owned. One of those dogs had previously been in MAS custody to complete a bite quarantine for a bite that occurred in January 2019.

The dog’s owner complied with all requirements, and the dog was neutered and returned to her after completion of the 10-day quarantine. After a thorough investigation of the bite is complete, we’ll have more information about potential outcomes for the dogs involved.

Will the Garth Brooks Nashville concert be rescheduled?