MEMPHIS, Tenn. — It felt like the whole town came out as Millington and Munford faced off on the football field on Friday.

Good clean fun- nothing like what landed 15-year-old Ethan Humphrey in the hospital.

He was allegedly beat up in the classroom at Millington Central High School.

Humphrey’s mother said he has a broken collar bone and concussion after another teen reportedly punched him in the head twice, grabbed him and body slammed him into a desk and the floor.

It all happened just as Geography class was getting underway.

His mom told WREG the attacker and five other kids also beat her son last week.

They were supposedly angry he wouldn’t play football with them after school.

Garner Johnson, like many in Millington, heard race was a factor too, but some of the kids in the group were black while others weren’t.

Ethan supposedly used the N-word, but several students said as he and the other teens were talking, he  was just repeating what another student said, ‘that my (N-word) has my back’.

WREG saw Millington’s School Superintendent, Dr. David Roper, in the parking lot outside his office, Friday.  We took the opportunity to ask him about the incident.  He became visibly angry and questioned why we were in the parking lot without an appointment.

Roper refused to answer any questions on camera, refused to confirm anything took place at the school, and simply said postings on facebook about the incident were not true.

Parents were concerned about the incident, however, and didn’t understand how any student could attack another student so violently.

“That’s atrocious, I’ve never heard of such a thing. It is unthought of, unthinkable, for a child to do that to another child,” said Gloria Hall. 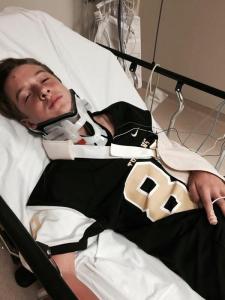 I-40 shut down from West Memphis to Downtown

Meet the first official pit bull police dog in the …