MEMPHIS, Tenn. — Shelby County Criminal Court Judge Jim Lammey is in the spotlight after sharing an article on his personal Facebook page. It was written by David Cole, a holocaust denier. 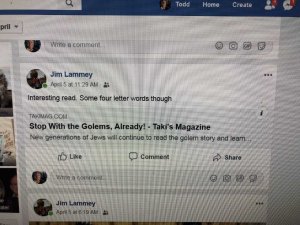 The article in question calls Muslim immigrants “foreign mud,” criticizes the integration of public schools and says Jewish people should get over the holocaust.

Judge Lammey says he was only interested in the article because it talks about Golems, which are clay figures from from Jewish legend that come to life through magic.

“I certainly don’t agree with all that,” Lammey said. “I thought it was interesting about creating man-made monsters,”

Carlton Carter isn’t giving the judge a pass. He says the article is offensive, even if the judge doesn’t agree with the inflammatory comments.

“He should have been more responsible. You would expect more from a judge.”

However, Judge Lammey says everyone who comes into his courtroom gets a fair case.

He’s held his position since 2006 and was re-elected to another eight-year term in 2014.

“When people come into the courtroom I don’t know what religion they are. I don’t know what background they are. It doesn’t make any difference to me,” Judge Lammey said. “I mean, I share a lot of stuff on Facebook. None of it has anything to do with my ability to be fair and impartial.”

Ancient tablet acquired by Hobby Lobby going back to Iraq

Inflation adjustments will mean higher deductions for 2021 tax year: What to know

Mississippi voting rights case is argued at US appeals court