Mississippi Governor Phil Bryant declared a state of emergency Saturday afternoon while damages across the state were being assessed.

According to the Governor’s Facebook page, flooding continues to threaten parts of the state. 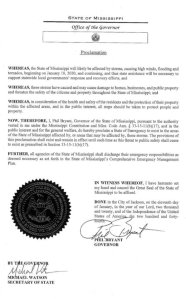 Some injuries were reported, but the severity of those injuries is unknown.

The tornado occurred between Holly Springs and Senatobia.

“It sounded like a bomb, like that type of bang,” 14-year-old Josh Davis and his brother Daniel say it took the roof off of a neighbor’s home. “The house could have been on the ground, in bits and pieces.”

Just southeast of Clarkdale, the storms knocked over 44 empty rail cars on the Mississippi Delta Railroad. The railroad released a statement saying no one was hurt and that a tree did fall on a locomotive.

Entergy is reporting outages across northern Mississippi and Arkansas. In an area where some of the strongest storms hit, almost 6,000 customers were without power in DeSoto County.

In Wynne, Arkansas, the storms tore off the roof of the animal shelter. The West Memphis Animal Shelter is working with the Wynne Animal Shelter to get the animals out of the damaged building.

Someone’s fur-baby was found hiding under a tree along Gaines Road! The Davis brothers are keeping him warm & comforted until he is reunited with his family! @3onyourside pic.twitter.com/fKenFJj2rr 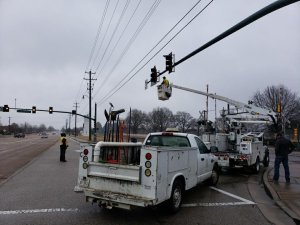 After the majority of the storms passed through Shelby County, more than 25,000 customers were left without power in the county.

A large tree fell onto power lines in Midtown, blocking a portion of McLean and affecting power in the area.

MLGW had crews ready and waiting Saturday morning and will be working on repairs through the day.

WREG will provide updates as we learn more.

Large tree falls on top of an apartment building in the 300 block of East Parkway N. No injuries . Knocked out power in the neighborhood pic.twitter.com/5lpaYDWdGP

‘Lol at all of this’: $28 Sam Adams beer found on menu at New York airport

“At a breaking point”: UMMC leaders concerned about increase in COVID cases