Police said they were following up on a complaint made to the city when they went to the house on the 2200 block of Zanone Avenue on Tuesday afternoon. There, police found the seven dogs in horrible conditions. 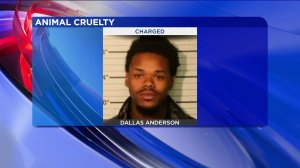 They noted the dogs lacked adequate food or shelter. One had injuries from another dog and had to be rushed to the vet for surgery.

“It’s kind of surprising there’s some dogs or a lot of dogs, and their dad ain’t taking care of them,” a neighbor said.

Police arrested 19-year-old Dallas Anderson and charged him with cruelty to animals.

He also faces a contraband charge after police said he tried taking marijuana into jail when they were booking him.

Memphis Animal Services said it’s too early to know what the fate of the surviving dogs will be. They’re waiting on police to finish their investigation.

Top Dems: We have framework to pay for $3.5T bill; no detail

Ancient tablet acquired by Hobby Lobby going back to Iraq

Mississippi voting rights case is argued at US appeals court